Glen School and the Roof!

Climbing up to the Glen School roof - so many of us remember this ritual. Some were a lot more daring than the others. I always started my climb on the little wall in the top righthand corner of the above photo. The goal of many was the gym roof (the smaller box-shaped building in the lower right corner of photo). Daring or not though, we were no match for Mr. McFall who would always make us come down. Can you imagine the amount of times he chased kids down from the roof!?
It was so easy to get up there. The appeal of course was not only the view but tracking down kickballs, baseballs, sponge balls, frisbees - you always found something and hopefully before the rain got to it.

The walls that we climbed up - which surrounded the Glen & Ridge Schools - were unique. It seemed like they were built specifically for the purpose of climbing! 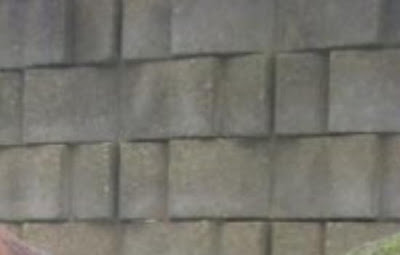 Above photo shows the unique block system that made it so simple to climb to the roof! What kid wasn't gonna try it?

Of course it was always more fun if you had a partner in crime climb up there with you!
Many times you climbed up there after school and you'd be caught by Mr. McFall - our father-figure custodian. "Come down from there!", he'd yell and you'd climb down the way you came up only to return the next day or next week and go through the same ritual again! It was probably so easy for him to hear us up there!
There was the easy way and the hard way to climb - those more daring chose the difficult way - up the gym wall! I started to do that once but I lost my nerve because it was such a high climb! I don't remember anyone ever getting hurt though and when you think about it that is amazing!
The easiest way to do it was in the back of the kindergarten classroom, near the toy shed. It had a short wall, which led to another short wall and before you knew it you were up! 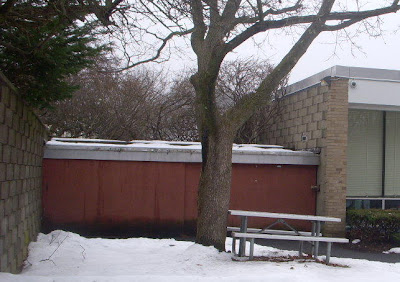 Above to the left is the wall you'd start on which would take you the shed (center). From there you'd climb up the wall in the righthand top corner of photo to the overhang across the courtyard. 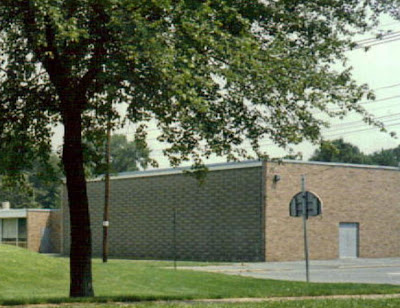 Above photo shows the gym wall which was high and straight up - many did it this way!

Kim Vukov Glen Class of 1969 (6th grade) recalls:
"Cheryl deGruchy, Karen Stewart and I scaled the roof all the time but we came down on the poles. We would hang over the edge by the kindergarten entrance (by the courtyard), wrap our legs on the pole and slide down. How dangerous was that!" 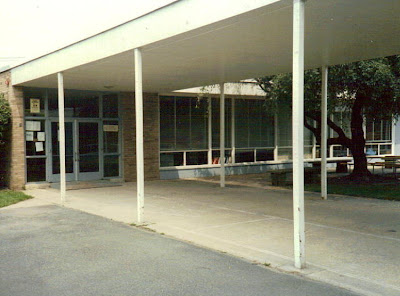 Above are the poles that Kim Vukov, Cheryl deGruchy & Karen Stewart would climb down. Andy Wright also climbed down the poles when caught by Mr. McFall!

Andy Wright Glen Class of 1974 remembers:
"I spent my entire childhood there (at Glen School) and remember Mr. McFall chasing me off the school roof - sliding down the poles into the courtyard area like Batman."
Bruce Meneghin Glen Class of 1967:
"My favorite thing about the gym was that we were able to get on top of the roof (starting at the wall by the kindergarten) to retrieve our tennis balls. Those early climbing adventures led to a serious pursuit of rock climbing."
Charles Nalbantian Glen Class of 1969:
".......I remember (Doug Terhune and Brian Krueger) scaling the roof even in 5th grade! Could it have also been deliberate that the red kickballs ended up there as often as they did - I wonder?.......I think I only got up there maybe twice or three times in total. Had a problem with heights - got that same feeling at the Grand Canyon some years later!"
Ken Merrill Glen Class of 1967:
"He (Mr. McFall) didn’t appreciate when we would climb the wall to get baseballs off of the school roof!"

Doug Terhune Glen Class of 1969:
"How many folks scaled the 2 story wall of the Glen School gym? Amazing nobody ever fell doing that!"
In 1994, members of the Glen School Class of 1969 (6th grade) met at Glen for a walk around the school during a reunion - eventually 4 made it up to the roof for old times sake. They included: Diana Wagner, Doug Terhune, Brian Kreuger & Charles Nalbantian. 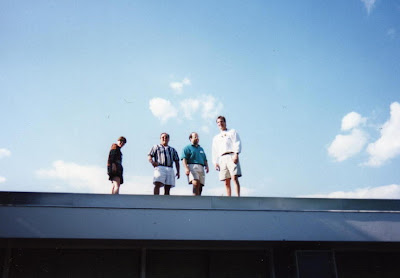 Climbing the roof is among a slew of memories we have from attending this great little school. One of the classic roof stories was when Tina Ege forgot to bring her bicycle home one day only to find it on the roof the next morning! I think Mr. McFall came to the rescue once again and I'm told it was actually her sister Lis Ege's bike!
Posted by Rick Flannery at 4:35 PM