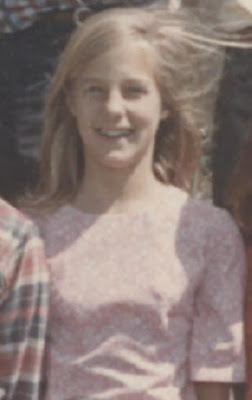 Cara Worthington - when you think of her - remember her - you think of many things. She certainly is and was one of the most intelligent people I ever knew - as a student I was absolutely intimidated with her brain-power! She's also one of the nicest people you could have known. When someone says that somebody is an all-around person, that would easily describe Cara. (The above photo of Cara is from 1967).
A piece like this would probably embarrass Cara but so be it. I for one always admired her approach to everything. It is pretty cool to witness the successes of former classmates, especially when you genuinely like them!
Cara was destined for the Ivy League - even at Glen School. She deserved the best but more than that, the Ivy League - Yale in particular - is better off having accepted her back in 1973.
Like several of my Glen School classmates - Art Brierley, Gary Vukov, Kara DeGraw, Karen Eide, Bruce Meneghin (to name a few) - we all attended school together for 13 years! Myself along with many others are not surprised by what Cara has accomplished or that she commands the respect she does from the education community. Cara currently teaches history at the prestigious Lawrenceville School in Lawrenceville, NJ. In our high school yearbook we were asked to quote ourselves - you know, say something profound or funny even. Cara's was perfect: "Look around!"
Back in 2001 Cara wrote this thoughtful letter that was published in the Yale Alumni Magazine. Here is that letter in its entirety.

"I have never forgotten one of the arguments made by Yale alumni against coeducation: It had always been expected that Yale would produce 1,000 leaders a year. How could this tradition continue if women were admitted? So here I am 25 years out, wondering if those traditionalists were right. Have I and the Yale alumni of my vintage lived up to Yale's expectations? And perhaps more important, have I lived up to my own?
When I decided to go to Yale at 18, I am sure that I did not realize that Yale would expect anything of me. I just wanted to go to a college where I could study Russian and environmental science, and as one of my friends reasoned, "If you don't like it, it is easy to transfer down." I even remember saying to someone who was impressed that I had graduated from Yale, "How can you be impressed by something I did for less than four years?" However, whether I like it or not, I am a product of Yale, and its expectations of its graduates haunt and inspire me. I know that I am not the only graduate to ask if I measure up against my classmates and against the expectations of a group of Yale alumni who really weren't sure I should be there in the first place.

I have to admit, though, that I am puzzled and amused by some of the entries in the "Alumni Notes," passages like this: "I am the CEO of a major corporation and travel throughout the word on a regular basis, my husband is the chief of surgery at a major medical facility, but the true joy of our lives is our three children ages 6, 8, and 10." Is this what those Yale alumni had in mind? Something is missing here. Raising kids and working full-time is harrowing and challenging for the husbands, wives, and the kids.While some alumni are taking this path, others are divorcing, and fighting for custody, and there are others who have lost their jobs, and others who will never have children. This is our reality. Sometimes it seems to me that we are afraid of telling the truth, and for those who were trained to seek Lux and Veritas this is strange indeed.
Last year, a women's singing group from Yale came to the school where I work to perform for an assembly. Looking at this group of self-assured, talented, and attractive women, I was struck by one sense -- heartache. Who was going to prepare them for what was ahead? Did they know it wasn't a clear shot to the top? Did they realize that life is full of heartaches? Did they have any idea of what would bring the greatest joys? Did they realize how many personal decisions and compromises would influence that career they were preparing for? Were they prepared to face the personal and professional challenges? And I asked myself: Why didn't I feel the same way about the Yale men in the Society of Orpheus and Bacchus when they performed the year before? Perhaps I should have.
I am a college counselor at a private school, and in that capacity I meet many college admissions representatives. Two years ago, I had the chance to have a long discussion with a representative from Mount Holyoke. My personal experience with all-women's colleges is limited. The closest I came to one of them was when my own high school guidance counselor said that she "could just see me at Smith." As one of the only girls in AP chemistry and calculus, I took that as an insult. Hadn't I already proven that I could compete against and sometimes even beat the boys? Why would I consider an all-girls' school? Yet, talking about the programs and focus at Mount Holyoke, I realized that they were hitting the complex problems and roles of women today head-on. And then I began to wonder if Yale makes the same effort to prepare its alumni for their futures, balancing ambitions, dreams, professions, and families.
I am only a history teacher and college counselor. I stayed at home for seven years with my first three children, and I was widowed 12 years ago at age 34. I was a single parent for six years, and then I remarried. I am now a full-time working mother of five. I am not a leader of anything, but I would like to lead a discussion. I am worried about school violence, about children of all ages left unsupervised. I am concerned about children who go home to empty houses and parents who are stressed out. I am worried about the quality of child care for most working parents. I am concerned about intelligent, talented women who are told, as one of my classmates was, that if they aren't willing to work full-time, there isn't a place for them. I am worried about mothers feeling trapped and frustrated at home. I am worried about children without fathers, and about fathers who are separated from their children. I am less concerned about our professions as Yale alumni, and much more concerned about the quality of our lives, and the quality of life of those people we have the power to affect, whether it be our families, our colleagues, or our employees.
Have we Yale alumni lived up to our potential as leaders? I am not so sure. When I read some of the "Alumni Notes" entries I shudder, for it seems that many are still trying to impress us with their achievements, as if still trying to live up to the expectations of that group of Yale alumni determined to produce 1,000 male leaders. Perhaps it is too much to ask for an assessment of the quality of someone's life in two lines or less, but there does need to be some acknowledgement that it isn't that easy or simple to define a life worth living. And this message needs to be clearly communicated to those who need to hear it most -- the undergraduates at Yale.
Maybe it is time for such a discussion on the campus. What are some of the conflicts and problems that Yale alumni and alumnae have encountered as they have tried to live full personal and professional lives? Why not gather those CEOs, partners, diplomats, doctors, professors, and all the rest of us, and ask: How is it going? What can we do better -- for ourselves, and for those whose lives we influence? And maybe, it just might make those Old Blues proud."