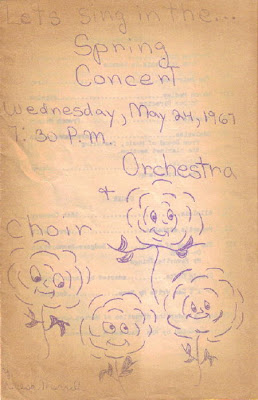 The above Spring 1967 program was designed by Theresa Merrill and "dittoed" by Agnes Larsen!

Choir - we all tried out for it. Amazingly I made it and was a soprano! When you tried out you had to sing by yourself while Mrs. Jamieson played the piano - ugh was that embarrassing! It was both humiliating if you didn't make it and gratifying if you did! 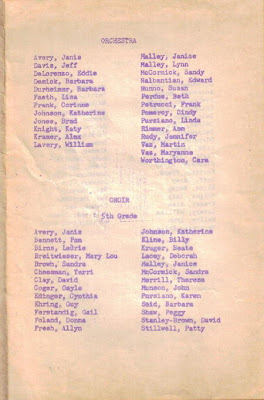 I recall we did a Christmas concert and a Spring concert in 5th and 6th grades each year. The concerts would include both grades. 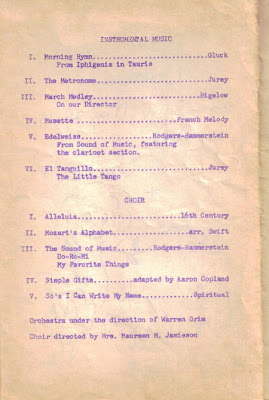 I recently unearthed the May 24, 1967 Spring concert program (my mom had saved it - it was copied on Mrs. Larsen's ditto machine!) To have these old programs is great because it not only shows you what songs you sung but also who was part of the choir with you, who was in the orchestra and who directed you. Now I will be the first to admit that I was - at the time - torn between being happy to be picked for choir and not happy because there was debate on whether it was "cool" to be part of it - but I was there nonetheless! I - like a bunch of others - put baseball high on my list and comparing baseball to choir - well, just no comparison at the time! 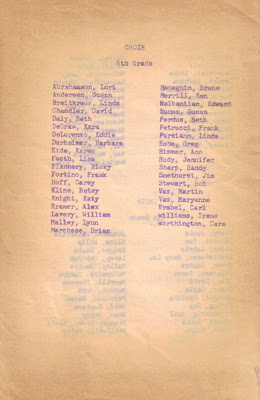 Now, I have loved music since I was playing my sisters' Beatle's records. Even today I love bands like Green Day, Coldplay and The Ramones and yet - with equal appreciation - I luv Yo-Yo Ma and Sinatra too! I say this because in the same hour I can listen to The Clash and The Stones and then put on a song like "Simple Gifts" by Yo-Yo Ma and Alison Kraus. Why do I bring that up? Well to me "Simple Gifts" is one of the most beautiful songs - beautiful in its melody and utter simplicity AND "Simple Gifts" was one of the songs we sang that Spring in 1967! It is here - sung in children's voices so you can get the feel of maybe what we sounded like! The lyrics are simple but wonderful! Simply click play on the photo below - quality isn't great but that was the song we sang. (You may have to adjust your volume).

Hit play on the picture below to hear the song!

The story of the song "Simple Gifts" goes back more than 150 years to 1848 when the song was written by Elder Joseph - a member of the Shaker community in Alfred, Maine. Incredibly, this renown and simple song has only one verse but had been known as an uplifting "Dancing Song" at the time.

For the most part the song was unknown outside the Shaker community until 1944 when Aaron Copland scored the song for use in the ballet "Appalachian Spring". He used "Simple Gifts" a second time for a compliation of songs in 1950. Even the band Weezer has used variations of the song on their 2nd album as the introduction to the song "Across the Sea" and in a song on their "Red Album" titled "The Greatest Man That Ever Lived (Variations on a Shaker Hymn)".

The song was more recently used in Barack Obama's inagauration - but to me the most beautiful rendition of the song is Yo-Yo Ma with Alison Krauss (if you've never heard Alison Krauss - her voice is beautiful).

Here are the lyrics as they were in 1848 and as we probably sung them:

'Tis the gift to come down where we ought to be,

And when we find ourselves in the place just right,

'Twill be in the valley of love and delight,

When true simplicity is gain'd,

To bow and to bend we shan't be asham'd,

To turn, turn will be our delight,

Till by turning, turning we come out right.


Talk to any former Glen School student and you'll find reactions to the Choir "thing". Here are a few responses from Glen "kids":

Tim Daly: "What's up with the choir thing? I made it and I DIDN'T want to be in it so I could be playing baseball!"

Rob Silvers: ".......I was asked not to be on the Glen School Chorus! That was a real blow to my self esteem and I have been in therapy since!"

Bob Daly: "I guess there is a pattern here. I didn't make the choir at all and I was the only one in my grade. I still can't sing!"

Trisha Daly-Hernandez: ".....I was also asked not to participate in the 5th and 6th grade choir! I had forgotten about that. It was quite devastating at the time because it was me and a few of the delinquent boys in class who I was then left alone with in the classroom while everyone else went to choir practice! I recall that they were not very nice to me at all! My mother was very annoyed that I was not allowed to join, even though I really wanted to................ I believe my mom went to the school to complain (which was not her style at all), to no avail. I remember the music teacher.....terrified me by making us sing all alone at the tryouts!"

Steven Breitkruz: "Well, I can relate to that as well. I was actually included in the 5th grade choir but then did not make the 6th grade (choir). I guess my musical talents have been diminishing ever since!"

Judy Wilson Davies: "I played flute for a short while in 6th grade."

Cynthia Wagner-Boseski: "Played the clarinet. I remember Mr. Grimm telling my mother that I showed promise when I didn't continue........"

Diana Wagner-Casey: "I played the violin 1 year and hated it. Sang in the choir as an alto.....most of the boys were sopranos. Still remember a lot of the songs we sang. To name a few: Waltzing Matilda, Oklahoma, Bring A Torch Jeanette Isabella."

Margaret Silvers: "Concerts were okay, only because I didn't "make" choir in 4th grade and I was mortified. I never told my parents when concerts were. I made it in 5th and 6th but I think only cause they felt sorry for me!"

Katie Knight: "I played flute. I sang in the choir at church and we did singing assemblies at school." (Orchestra and choir did the concerts together)

Beth Daly: "I was in choir and I remember learning to sing the song "Let There Be Peace On Earth" - it is still a favorite of mine, and I still remember all the words."

Ann Rimmer: "Sang in the choir and played clarinet. I do remember singing in the Christmas concerts ( I think Cara Worthington and I led the 12 Days of Christmas), also a clarinet solo and duet with the band leader (don’t remember his name). If memory serves me I played some Herb Albert and the Tijuana Brass song." (The musical director at the time was Mr. Grimm)

Posted by Rick Flannery at 8:10 AM