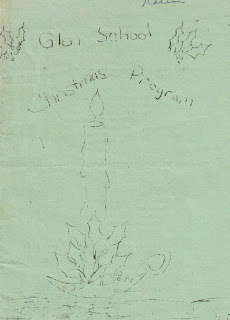 Above is the cover of our 1966 Christmas Program - artist unknown!

In December, 1966 the 4th, 5th and 6th grade classes at Glen School put on a Christmas Program -this is my attempt to try and recreate it as best I can.

Unlike today, you had to try out and be selected for choir. This wasn't without some trepidation - you know, "Will I make it?" - I mean my voice started to change a little in 1966! Very professionally, Mrs. Jamieson told me that I had made it and I was a soprano! I wondered - is that normal? Me - that high?

Anyway, you stood before Maureen Jamieson and her piano with a couple of classmates and sang something like "America the Beautiful" by yourself - ugh in front of girls - girls you liked!

Looking back, Maureen Jamieson's shows and concerts were quite something for grade school - very well-thought out and always a  theme within a theme. She took it all very seriously. There's so much debate about Christmas carols and what you should and shouldn't sing these days - but honestly the beauty of this show and so many others was the innocence of it. It wasn't about different holidays - it was truly about the holiday season and all of us were excited about it. Its what makes kids so great - we weren't concerned with who had money or who was what religion - we were all friends at a great time of year! 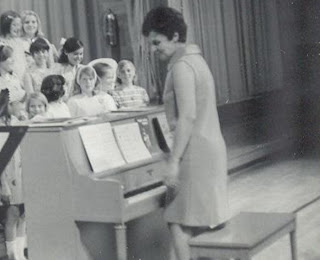 Above, Maureen Jamieson herself at the piano - not our Christmas show. Photo is a cropped version of a photo taken by Sam Silvers. Photo is property of and used with the permission of Margaret Silvers-Myatt. 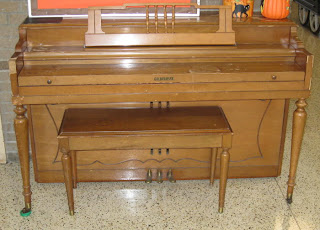 Above, is Mrs. Jamieson's original piano and bench!! I stumbled upon it as I took my long-awaited walk through the school before the reunion - I would hate to see it end up in the dumpster - if only it could talk! Photo taken by Rick Flannery.

The December 1966 Christmas Show was titled "Animals at Christmas". It included the 4th, 5th and 6th grade choirs and a mixed orchestra called the Glen School Ensemble. I believe the 4th grade choir did a separate night.

Karen Pursiano-Parry had contacted me last year and donated several things to the Glen School archive and among them were the actual program of our show! Her mom had saved this among her papers. Here's Karen's own words regarding finding it:

"My mother managed to save the Christmas program. All of our names are listed in it. I still remember standing on stage and belting out the "Ho Ho Ho" part of the song "Up On the Housetop"! I am sending you the original - you can keep it because it really belongs to ALL of us!"

Yes there were those that didn't make the choir - sometimes crushing egos! Those that didn't make it would decorate the tree and take care of other details related to the show - sorry you guys! As Artie Brierley used to say, "I had better things to do!" - though I suspect he would have loved to be part of the choir just the same!

The musical selection for "Animals at Christmas" included old carols and classic Christmas poetry as well as orginal poetry by the 5th grade - all sung or read by the students. The 5th and 6th grade choirs sang a total of 9 songs and recitations in-between. The 4th and 5th choir sang 9 songs with an original poem recited by a student in-between - each poem was original and authored by the student who read it.

Unfortunately a date can't be made out on the program but considering that it may have been somewhere between December 15 and 20, the weather was wintry - high 20's, low 30's - a little wet with flurries here and there according to weather history.

The audience was filled with our parents, siblings, relatives and Mr. McFall and his whole family. Probably better dressed than anyone in the room, Mr. McFall - our beloved custodian - enjoyed attending "his" students events and we loved it too - proud to perform for him.

My sisters recall going and remember their brother's sweaty palms and cracking voice!

The chairs - single, folding chairs - were each set up by Mr. McFall earlier in the day. 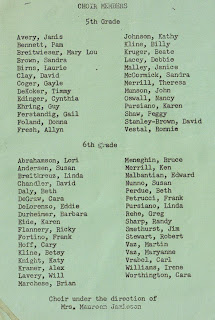 Above is the list of 5th and 6th grade choir members as it appeared in our program.

The first song was a classic English carol - "Masters in Ths Hall". There was narration done by Cindy Hansen - no specific poem.


Masters in This Hall

Masters in this hall
Hear ye news today
Brought from over seas
And ever you I pray.

Chorus:
Sing we now Noel
Sing we noel clear!
Holpen all the folk on earth
Born the Son of God so dear!

We heard the oxen low.

Chorus:
Sing we now noel
Sing we noel clear!
Holpen all the folk on earth
Born the Son of God so dear!

Ox and ass Him know
Kneeling on their knee
Wonderous joy had
This little babe to see.

Chorus:
Sing we now noel
Sing we noel clear!
Holpen all the folk on earth
Born the Son of God so dear!

This is Christ, the Lord
Masters be ye glad!
Christmas is come in
And no folk shall be sad!

Chorus:
Sing we now noel
Sing we noel clear!
Holpen all the folk on earth
Born the Son of God so dear!
Play the link below to hear the song "Masters in This Hall":


Next, we sang "Friendly Beasts" another old English carol. This was followed by a poem read by Betsy Kline titled "Christmas in the Forest" by Ruth Walton. A 3rd poem was read following Betsy's though I can't make out the title - it was about a Christmas tree and was recited by Sandy McCormick. (Where are you Betsy Kline?)

The 3rd song was "Twelve Days of Christmas" and we were led by Ann Rimmer and Cara Worthington. Following this was the poem titled "Little Lamb" read by Jennifer Rudy.

The 4th song in the program was "Carol of the Shepherds" - an old Polish carol. Two poems followed: "The Barn" by Maryanne Vaz and Jim Smethurst and "The Cuckoo" by Lori Abrhamson.

Below are the words to "The Barn" as recited by Jim Smethurst and Maryanne Vaz:

The Barn by Elizabeth Coatsworth

"I am tired of this barn!'' said the colt,
"And every day it snows.
Outside there's no grass any more
And icicles grow on my nose.

"I am tired of hearing the cows
Breathing and talking together.
I am sick of these clucking hens.
I hate stables and winter weather!"
"Hush, little colt," said the mare,
"And a story I will tell
Of a barn like this one of ours
And the wonders that there befell.

It was weather much like this
And the beasts stood as we stand now
In the warm good dark of the barn —
A horse and an ass and a cow."
"And sheep?" asked the colt. "Yes, sheep
And a pig and a goat and a hen.
All of the beasts of the barnyard."

The usual servants of men.
And into their midst came a lady
And she was as cold as death,
But the animals leaned above her

And made her warm with their breath.
"There was her baby born
And laid to sleep in the hay
While music flooded the rafters
And the barn was as light as day,

And angels and kings and shepherds
Came to worship the Babe from afar,
But we looked at Him first of all creatures
By the bright strange light of a star!"


Our 5th song was called "Carol of the Birds" a French carol, which was followed by "Christmas in the Woods" written by Frances Frost and recited by Katie Knight.

Below is the story Katie recited that night: 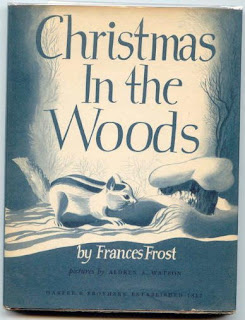 Above is the classic Frances Frost book from 1942 whose verses were read by Katie Knight.

"Christmas in the Woods" by Frances Frost 1942


The woods were still and the snow was deep,
But there was no creature who could sleep.
The fox and the vixen ran together
Silently through the starry weather.
The buck and the doe and the fawn came drifting
Into the clearing. The rabbit, lifting
His ears, shook white from the twigs he brushed;
The chattering squirrel for once was hushed
As he sat with his paws against his breast,
And the bobcat crouched on the mountain crest.
Safe in the fold the silver sheep
Told the young lambs not to leap.
In the shadowy stable the horses stood
Hearing the quietness in the wood.
And the cattle sighed in the fragrant barn,
Waiting the instant of the morn.
The stars stood at midnight, and tame or wild,
All creatures knelt to worship the Child.
Song number 6 was an original song composed by Kensey Stewart - who was part of the Ridgewood Public Schools system. It was titled "An Old Christmas Greeting". The song was followed by the poem "Gladde Things" recited by Cara Worthington - the author of the poem is unknown.

Song number 7 was called "Joyful Christmas Song". The 8th song was "The Night Before Christmas" with the Glen School Ensemble.

Our 9th and final song that night was the beautiful and timeless "Silent Night".

The others that made up the Ensemble that Christmas included:

Our Christmas tree was decorated by:

The 4th and 5th grade combined on a different night and sang 9 songs and 9 original Christmas poems. 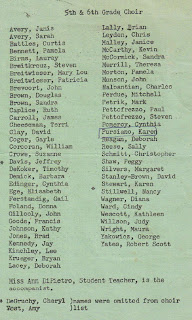 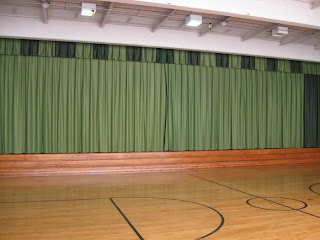