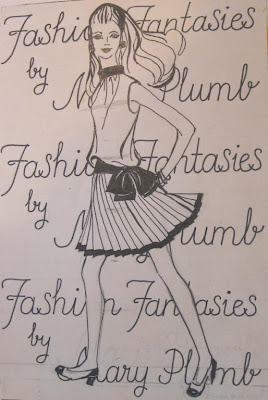 When you think of your local PTO today, images of fundraisers like bake sales and school stores come to mind but back in the 60's and 70's our stylish and creative mothers came up with fashion shows (among other things) as a way to both raise money and enjoy a day with other moms and daughters. Hey even Ken deGruchy went too - he filmed and tape recorded these events!

People like Jeanne Stanley-Brown and Sylvia McCormick among others turned these organizations into truly fun, successful and profitable events for the school and for charity. It had to be a lot of work to be sure. In fact one of the items I wanted to look for at Glen School (when we had our reunion there in 2009) was the engraved plaque of PTO Chair-Women that hung in the main office - I'm not even sure its still there anymore but it would have been great to photograph it.

When I was in retail in the early 70's, I leaned toward a career as a buyer (almost took the buyer training program at Brooks Brothers) but after 5 years in the business I found a new direction. While I was at Lord & Taylor though, I did model some clothes myself for a while - can you believe that? I modeled at the HoHokus Inn and the Fashion Center - I did find one of the clippings (posted below!) - they are quite hilarious! Aside from a few laughs, the reason I mention this is because of the work involved in organizing these things. Looking back on that time - it was a helluva lot of fun and I met some great people at L&T - its how I discovered the fun of NYC and I spent a great deal of time at my favorite bar - PJ Clarke's!

Above, a modeling show that I was part of! I modeled a Christian Dior suit!!! I did this for about 6 months as a lark mostly! I'm the guy in the top photo on the left!

Anyway................just as our class started to attend kindergarten, fashion wasn't exactly a big deal - I mean while I admire Dwight Eisenhower, the Eisenhowers didn't exactly get people fired up about such things! 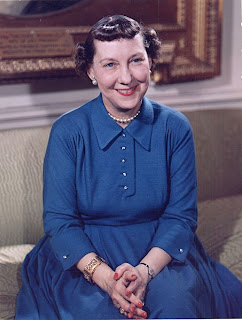 Above is First Lady Mamie Eisenhower in classic 50's style - no offense, but dreary!

Enter Jackie Kennedy! Yes, Mamie Eisenhower was much older than Jackie Kennedy but compare the 2 and Jackie helped to usher in a whole New Frontier of a different kind. Jackie's sense of style appeared in the Fall of 1960 - our first year of school and  instantly the sun began to shine and moms around the world began to bob their hair and wear smart dresses and pearls every day it seemed - and look younger! Women's fashion was coming out of a relatively dark age - the McCarthy-era. Out was dour and drab and in was bright colors and smart looks. 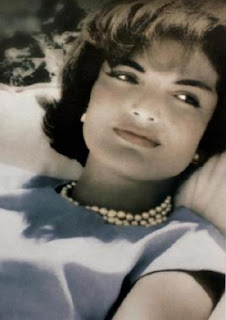 Above is a gorgeous picture of Jackie Kennedy - pearls and all. She would almost single-handedly put fashion back on the map with her simple designs and pastel colors.

It seemed every other week when I came home from school, my mom was either hosting a coffee and tea afternoon or at another neighbor's house who's turn it was to host one. The mom's always used their best china and silver for these things. Even without these coffee hours, the mom's seemed to always dress their best - even pearls! When I would ask "Why are you dressed up?" my mom's reply was usually "You never know who might stop in." She always looked great for the egg man, the milk man and the laundry man!!

The 60's suddenly saw women gaining confidence and finding independence. Marlo Thomas through her tv show "That Girl!" would tell the world that it was ok to be yourself - to go bra-less, to have a career and have your own apartment! Twiggy would - along with a wave of British bands -  bring mod fashions to the younger generation  and women's liberation led by Gloria Steinem would soon make headlines. 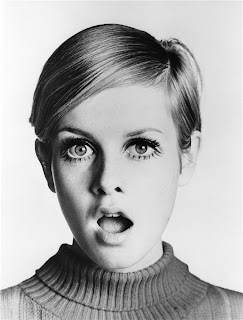 Above is Twiggy who would along with the huge wave of British bands from the 1960's gave us the mod look! 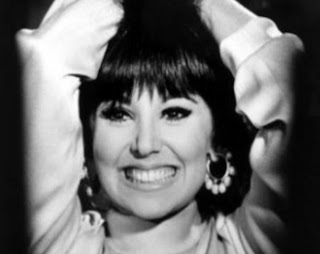 Above is Marlo Thomas who's "That Girl" character Ann Marie would show that its ok to have a career, an apartment and to sometimes not wear a bra!

So in the 60's began a series of very stylish fashion shows put on by the mom's of Glen School - hey even Miss Nostas was a model! - but for the most part the models were our moms and sisters.

At various times the models would include: Anita Bennett, Yvonne Foytlin, Clara Gould, Dagmar Randolph, Joan Sinclair, Betty Stillwell, Miss Suzie Andersen, Miss Gail Kramer (Alex's sister - remember Alex - what a drummer!), Ruth Glisch (who sadly lost a child in a terrible accident on Van Emburgh Ave), Joann Hansen, Joan Frankhauser, Elizabeth Nostas, Dard Jones, Nancy Flynn, Miss Carole Rimmer and Dianne Rath. I am sure there were others as there were at least 3 or 4 of these events through the years.

The fashions would be provided by Peck and Peck, Mary Plumb of Glen Rock and Betty Carrey among others.

The girls in my class and other classes would attend with their mom's and sisters and according to Ann Rimmer - really looked forward to it. Ann's mom - Mae - was one of the organizers. One of Ann's sisters - Carole was also involved as a model.

Annie remembers this about the fashion shows: "I was excited because they were both involved," (her mom and sister Carole), "and I do remember going with my mom to Bette Carrey's on Route 17 a few times (that was the boutique that supplied the clothes) to pick out stuff and loving that cause I've always been into fashion!" 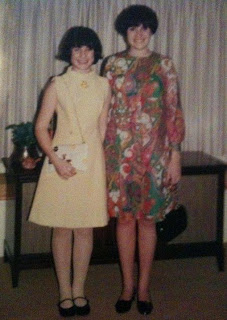 Above is (l to r) Ann Rimmer and her sister Carole. Photo was taken at Annie's house just prior to leaving with their mom for a fashion show at Glen School. Classic Annie - did you ever not smile?!!

These events were memorable - I can't imagine them happening today. They took place at a time when our mom's for the most part were home, had the time and could really plan these things - and they always came off without a hitch and with class.

Sometimes the fashion show would be coupled with the mom's playing cards. The scorecards would be included in the fashion program. Not sure what card games they played but the scorecards had headings like "We" and "They"! The playing cards were on loan from the Schweinfurth Florist and yes they had to be returned!

To enhance the decor, stage props were used used and these were donated by Glen Rock Lumber, Bergen Bluestone, Nature's Creations of Upper Saddle River and Suzanne Wirtz who was a teacher from Mahwah, NJ.

Below is a 15 minute recording by Ken deGruchy of the fashion show from March 10, 1967 - probably the show Annie attended with her sister as it was our 6th grade year. While its a little long - you get a feel for what it was like. I think the recording is either just before or after the actual modeling took place because there is music being played - all insturments played by our parents! The music of course reminds me of what my parents played - ugh I hated it so and it reminds me of my parents basement parties!! You hear a lot of chatter and Ken talking with some other boys who were present. (Not posted yet)

Though it would vary, the Fashion Show committee would include: Barbara Perdue, Mae Rimmer, Mrs. James T. Rhodes, Mrs. Joseph Flynn, Jo Lalumia, Bix Smethurst, Delores Meltzer, Rosemary Fierro, Pauly Yates, Mrs. Ralph B. Sweet, Mrs. Donald Krueger, Else Ege, Helen Romines, Mrs. James A. Rudy and Nina Harootunian. I am sure there were others so if you know the names please let me know so I can add them here.

The models would be accompanied by piano music which was played by Mrs. Edward Zima - who I believe was the wife of Mr. Zima our 5th grade teacher. There would be other music afterwards during the coffee and cards.

Then there was the stage lighting and this was handled almost exclusively by Ken deGruchy who was a pro at this sort of thing even at that young age!

Of course there many other parts to these shows too. Hair styles for the models were attended to by Leonard Benjamin of Ridgewood and Colonial Beauty Salon of Ridgewood.

The commentator at the shows was Mrs. Leonard Kramer (Alex and Gail's mom) - introducing the models, the clothing, etc.

Myron Andersen (dad to Suzie!) built and designed the runway. Robert Pearston who was a graphic arts student at Ben Franklin Junior High printed the programs which of course were designed by Else Ege (see samples below). 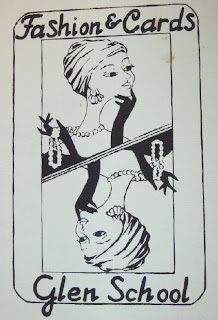 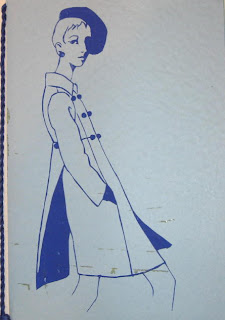 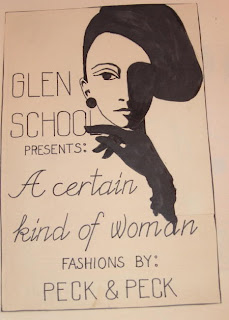 Above some samples of Else Ege's artwork used for the fashion show programs.
Carpet for the runway was provided by Oskan Harootunian.

The shows always had titles like: "Spring Reflects A New Look In Fashions and the Home", "Fashion Fantasies", "Fashion and Cards" and "A Certain Kind of Woman".

The fashion shows were just part of number of different events that were held at Glen School over the years.

My thanks to Else Ege for allowing to use her programs, to Ann Rimmer for the photo of her and Carole and to Gail Kramer for remembering.

Thanks to Ken deGruchy for providing the recording from the March, 1967 fashion and card show.
Posted by Rick Flannery at 11:33 AM