Like Margaret Silvers, my father took a lot of home movies too. I wish I could go back in time and whisper in my dad's ear while he was taking his movies. My dad's films are finally being digitized. There's me walking to school the same day Margaret's dad took this teasing gem included here! They never seem to be long enough these movies. There's also a film of my kindergarten class the same year as the film below dressed in our halloween costumes - cool stuff to be sure but while you're watching you're saying "Dad, go inside the classroom - take shots of Mrs. Janicke!" But its what make these fleeting moments on film so special and thankfully due to the great technology of today, we can preserve the history!

The film below is only 25 seconds and is used with permission and sincere thanks to Margaret and her dad - Sam Silvers who took such care to document life on Roslyn Road.

The film starts off with the Silvers' boys leaving for school on their bikes. For me, the wonderful thing about this short movie  is that I'm there - somewhere! Karen Eide is there, Bruce Meneghin is there, Gary Vukov, Ricky Marsh - you don't see us but it was our first day of kindergarten! You see Mr. McFall also welcoming the kids to school as he always did and watching over the little pond that we had in the courtyard - yes it held fish and Artie Brierley fondly recalled how much he enjoyed that little pond. When Artie passed away, his apartment was filled with the evidence of his love of fish and fishing. The pond wouldn't last long. It would be filled in and used as a garden until finally it was completely removed!

With this film, please enjoy this fleeting but live look at Glen School during its second year of operation. I will be adding more films on this blog - some will be my dad's and others by Margaret's dad that add so much to the ever-evolving documentation of life in and around Glen School. 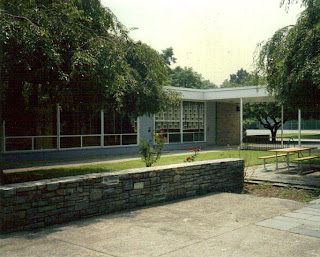 Above photo was taken by me in the 1990's. Stone wall and pond shown in the film below were still present. Standing there in the courtyard or anywhere around the school, many memories come back!

Also please look for the next story about Glen School's Brownies and Girl Scouts. There will be an amazing special treat for my classmates in this story - you're gonna love it!

Just click on the arrow below to enjoy this little film!

Posted by Rick Flannery at 9:47 AM