Among the outside activities many of us took part in at Glen School was the Girl Scouts and Cub Scouts or as Artie Brierley used say (regarding the Cub Scouts) - "the boys in blue". 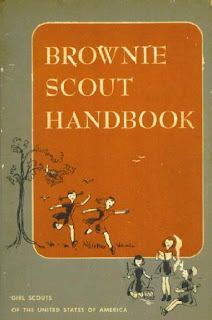 By the time the girls at Glen School reached 2nd or 3rd grade, a lot of them would join the Brownies. Being with your firends and the chance to make new friends made this a fun experience for many. Brownie life was made up of meetings, dues, refreshments, games, baking, crafts and trips to nursing homes and more. 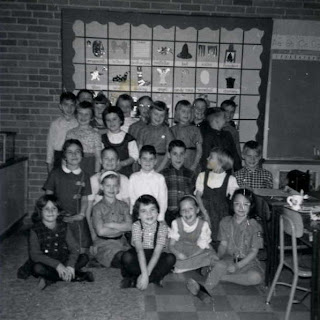 Above is a classic photo courtesy of Judy Wilson Glen School Class of 1969. It's Mrs. Cook's class - probably 1st or 2nd grade. You can see some of the girls in their Brownie uniforms which told you they had a meeting after school. While I can't make out everyone, Barbara Demick is first in the front (l to r), Kim Vukov is just behind her, Breitweiser, Janice Avery, Judy Wilson, Margaret Silvers (with head turned) and Karen Stewart I think. Help me if I'm wrong Mags!

The Brownies would work to earn their merit badges badges for a variety of tasks. The badges would be awarded and sewn onto their sashes.

If a girl kept going, after 2 years they would become a Girl Scout. As a scout they would continue earning merit badges for somewhat more difficult tasks. 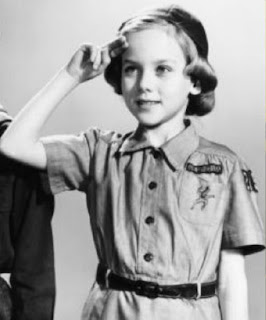 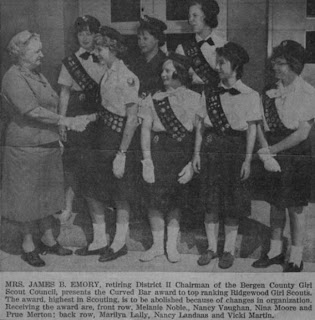 Above Ridgewood Girl Scouts being honored.

The Brownies and Girl Scouts have always been famous for selling their cookies and our local girls were no different. In fact, I want to say that the cookies back then were actually better - they were made by the Burry's Company. Everyone has their favorites. The girls would sell to family and friends but would also do a lot of door to door selling back then - a time when everyone in the neighborhoods knew each other and it was much safer to sell that way. 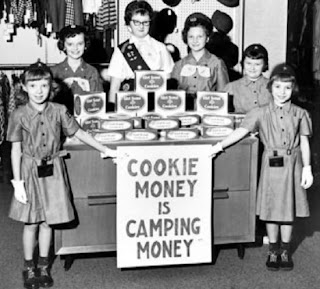 Above: Girls Scouts and Brownies banning together to sell cookies for camp. 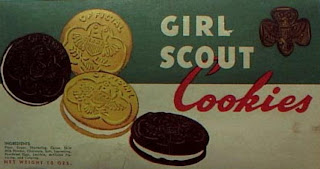 Above: It's amazing the photos you find on the net. This is what a box of Girl Scout cookies might have looked like in the early 1960's.

Meetings would take place at the homes of mom's who were leaders. The girls would pay their monthly or bi-weekly dues. There would be a variety of activities and refreshments and the girls would continue to work on and plan their merit goals. 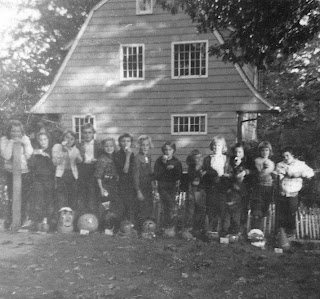 Above is a photo that is the property of Patricia Nagy Cove. It is Ridgewood Girl Scout Troop 86 giving a carved pumpkin show at Patricia's house in Ridgewood.

There would also be camp overnights at Pound Ridge, NY. 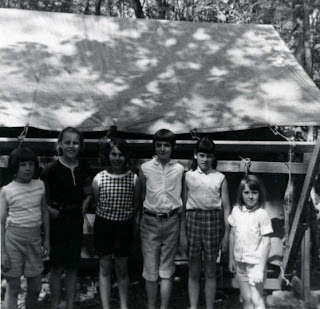 Above: Another classic photo from Judy Wilson Glen School Class of 1969. It is 1967, Troop 216 camping at Pound Ridge, NY. The girls are from l to r: Diane Delorenzo, Judy Wilson, Amy Vest, Sarah Avery, Debbie Reagan and Pam Morton.

I recently asked a few Glen School alums about their scouting experiences - here's some of what they shared:

Margaret Silvers: "I was Girl Scout Troop 199. I remember because my brother Robbie would tease me about my troop number. It's so hard to say, "one-ninety-nine"...........he tormented me about my troop number! Mrs. Breitweiser was a troop leader I remember. My mother filled in one year and I think she hated it! At that time, Sally Reese would push us to "cut" the thursday afternoon meeting and pocket the .25 cent dues!"

Katie Knight: "I was a Girl Scout. The troop number escapes me. In 4th grade or so, I remember being sad that my brothers all attended a very cool Boy Scout camp (Camp Yaw Paw) in Mahwah (NJ) every year and I sat in a classroom and drew pictures of my family! Mrs. Yingling was the troop leader when I was in 6th grade and she was very cool - we studied flowers, herbs - took lots of hikes, looked at the stars - it was great! I seem to remember her being a Quaker which I thought was impressive!"

Beth Daly: "I was a Girl Scout all through Glen but I can't for the life of me remember who our leader was."

Jennifer Marcello: "I was a Brownie. Can't remember the name of our troop leader but she lived on Van Emburgh. (I have a) vivid memory of making sugar cookies to take to a nursing home. Also remember selling cookies as a Girl Scout back in the day when you could safely go door-to-door alone."

Diana and Cynthia Wagner were both scouts. Cynthia remembers: "Yes, we were in the Girl Scouts with a mother who was a leader (their mom). We went to Travell where my mom had her troop and she even made me become a cadet in junior high school! I got a job as soon as I turned 14 so that I would have an excuse not to join (again)!

Ann Rimmer: "(I was a) Girl Scout for a year or two. I remember going to Girl Scout camp which was a lot of fun!"

A couple of years ago, when I started this blog, Beth Daly had asked me if I remembered the tv commercial Karen Eide did for the Girl Scouts. I remember a lot of things and I was embarrassed that I did not remember this about Karen! I asked Beth Daly more about it and she had told me it was a big deal - the girls all gathered at Karen's the day it was first shown on television. When Beth shared that story with me, I thought "Surely there must be a way to find that commercial somewhere." I actually wrote to a few places - Girl Scouts Organization, etc - trying to found out how one would go about finding a video of a vintage commercial like that. I even wrote to Karen on Classmates but we all slowly stopped paying to be on there. Then Karen found this blog and got in touch. Of course one of the first things I asked her about was the commercial. Karen told me about it and as luck would have said "Yes - I have it on DVD!" I was obviously thrilled and patiently waited for the day Karen would put it on the web. While I don't manage to go on Facebook a lot, I was fortunate enough to be on the day Karen posted the news on her wall and she gave me permission to use it here! The commercial alone makes this story - thanks Karen!

Having viewed the commercial, it definitely looks familiar and while the girls all gathered over at Karen's to watch it, I'm sure all of us were told about it and I can see myself rushing home from school to see it - "Baseball(?) - not now, gotta go, Karen's on tv!"! How cool that it is preserved for all of us to enjoy!

Of the commercial, Katie Knight shared this: "Yes, I was in the troop that tried out for that commercial. I do remember one girl being so upset and crying so hard when she didn't get picked that they let her be in the commercial. I used to watch it at Karen's house when it was on!"

Annie told me: "I totally remember the Karen Eide commercial! She was the perfect pick!"

There was just no better way to conclude this brief story about the Girl Scouts at Glen School then with Karen's actual tv commercial. Just click on the little arrow below and enjoy!


If you have anything you'd like to contribute to this story, please email me!