Show Me the Way To Go Home - From Glen School! 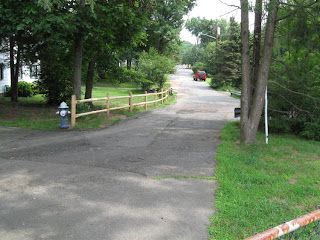 Above - Salem Lane - this path was taken by tons of kids who lived on the other side of Van Emburgh Ave, E Glen Ave, Allison Court or Gateway Road.

There were 3 paths we took for the most part. There was Salem Lane which Cara, Linda, Artie, Beth P, Jennifer, Betsy and so many others took home most of the time. 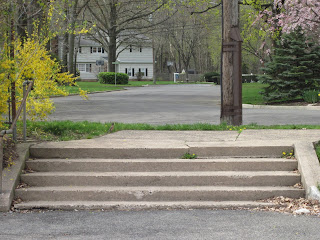 Above - the cement steps that lead to Westbrook Road. Merrill, Vukov, Rehe, Koper all took this way to get home. I too would sometimes take this route home talking with friends along the way and taking a half hour or more to get home! 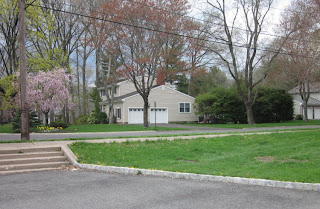 Above - the same steps to Westbrook Rd. All the Salem Ridge kids would go to the right to Eastbrook, Norgate, Roslyn Rd and many others.

Then there was the West Brook Rd / Quackenbush routes. If you took a right when you got up the steps or simply walked across the baseball field toward the little tree in the corner - you were headed to Roslyn Rd, East Gate, Norgate, Eastbrook, Arrow Lane, etc - Margaret Silvers, Karen Eide, Chic Voorhis, Ann Rimmer, Katie, Hank, Doug and many others would take that route. If you went up the steps and headed straight you headed for Quackenbush, North Rd and E Glen Ave. 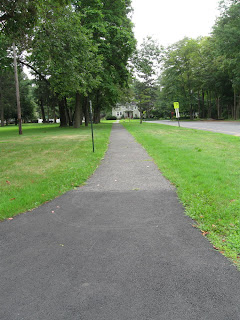 Above - the long, narrow macadam path I would usually take to and from school.

Then there was the long macadam pathway that led to E Glen Ave - this is the route I took most of the time but I also took Westbrook to Quackenbush if I happened to be walking home with Gary Vukov, Ken Merrill, Jan Koper - they lived along the way. For me, taking that route was not a long distance but it would take me longer to get home because I would get side-tracked trading baseball cards or talking with friends or exploring the woods or the field by the Breitweiser's!

Going home for lunch was great! You had basically an hour and you'd get home pretty quickly. I would often run home if  there was a new song I liked on the radio - WABC-AM radio in NY tended to play their popular songs at specific times! Otherwise you'd watch a favorite rerun of a tv show then take the walk back to school.

When you got to ride your bike to and from school that was even better!

When walking along those 3 paths today - they really haven't changed and they bring back a lot of memories of running home to catch the end of a World Series game on the radio or if it was the fall, getting home to play football while there was still enough light!
Posted by Rick Flannery at 11:21 AM