Yes, I know this is a fluff story - but I was at the school recently (passing through as usual) and taking photos. Roamed around behind the school and saw that the checkerboard is still there - well kind of. It's a bit over-grown. The original (I think) alternated between cement (white) and macadam (black) and had a corner that was filled with sand - the sand is still there too but grass has filled in. 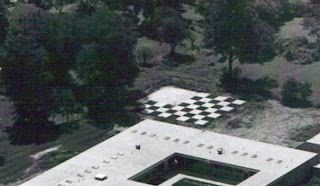 Above a photo of Glen School just before it opened in 1959 as construction was winding down. You get a great view of the checkerboard as it looked when new! We probably played some sort of game incorporating the boxes. The large white box at the top corner was sand. The perimeter has now filled in with trees and brush over the years.

The perimeter that has a little slope used to be wide open and led to a small creek where we used to hang out looking for salamanders and turtles. The perimeter has been completely covered now. Like all things, our playground seemed so big back in the day but is pretty small - it was a lot of fun though! If I remember right we had an amazing swing set, a well-made, colorful slide, see-saws and monkey bars. Just about every good weather day would be spent out there! 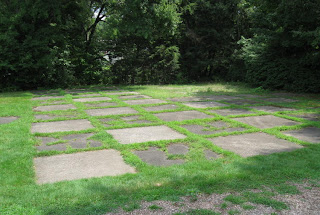 Above is the checkerboard as it appears today (August, 2011). I was psyched to see it still there despite being over grown. 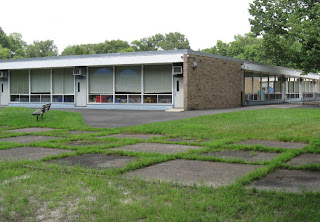 Above the back of Glen School from the checkerboard. The three doors you see represent our first, second and third grade classrooms (left to right). 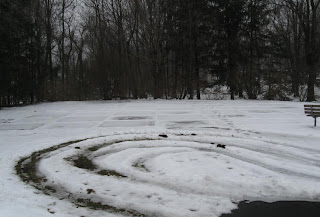 Above the checkerboard during the winter - photo was taken in December, 2008.
Posted by Rick Flannery at 12:47 PM