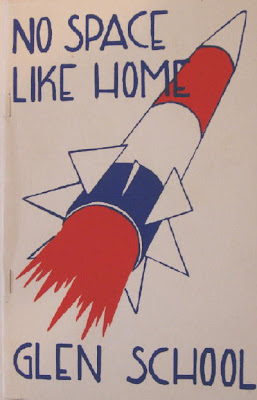 In 1962, the Space Age came to Glen School in the form of a musical titled "No Space Like Home". The show was produced by none other than Muriel Henckler. It was an entirely original musical that was performed by Mr. Linden, several VERY talented teachers and a ton of parents. The above cover to the program was designed by Else Ege.

As Scene 1 opens we find Mr. Linden sitting in his Glen School office. From there we leave earth for Planet Pluto. After a performance on Pluto, we travel to Mars. On Mars we find there is an all-important "United Meeting of the Planets" that must be attended to before taking off for Venus for more relaxing fare - a fashion show! Then its off to the moon for a mysterious visit to Eduardo's Hideaway (incidently Eduardo is played by Henry Henckler who had more jobs in this production than anyone!) Then its off to another show on Neptune before we all return to Mr. Linden's office for the finale! Whew!

While I don't remember the show, I definitely remember sitting in the audience watching my dad Fred Flannery. He was one of the singers along with my future 3rd grade teacher Amy Beattie!

Probably the best part of this entire production was that every single parent who had a kid(s) attending Glen School was there that night - in the audience, had donated money, helped with refreshments, performed, helped behind the scenes, made puppets, designed and printed the program, the script - you name it and one or both of our parents was involved! Any young parents out there - take note - participate in your kids education! Its a win-win situation for everybody - the friendships, the school, the interaction with teachers - like everything we did at Glen School it was priceless!

We are actively searching for movies, slides or photos of this night so if anyone has anything - PLEASE contact us! So far we have 2 people that might have something so I'm hoping when they get the time to search we'll get lucky! How great would it be to find these photos and see your mom or dad? My sincerest thanks to Else Ege for supplying the photos of the program which really help to make this story! I hate spelling names wrong so if there's a name that needs to be corrected please advise!

Any parents that were part of this classic show please email me (cmad@ntpLx.net) with memories!

Here's the list of credits followed by a list of patrons (names are spelled as they appeared - I will correct if I know the right spelling): 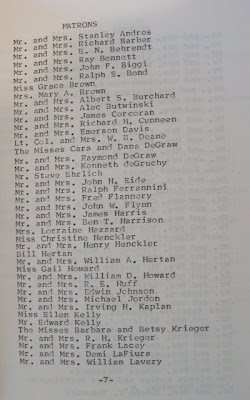 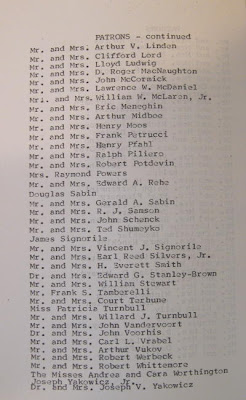 Below is the list of all the people who worked the various souvenir and refreshment stands! That show had to be so much fun for everybody involved! Now that the show's over let's all head over to the Henckler's for coffee! 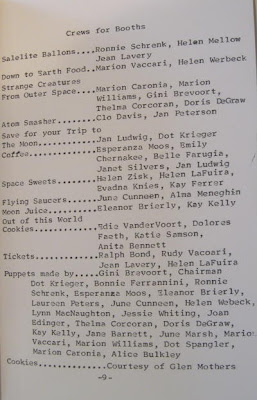 Posted by Rick Flannery at 5:27 PM