As far as I can tell, this class photo is from the 1960-61 school year (the sign in front says 1961). That was the only year in the 60's that class photos were done with the stage as a backdrop. Photos were then taken in 3 locations outside and then returned to the gym in later years.

This is Pat Prescott's first Glen School 4th grade class. We still can't identify everyone so please help where you can! Thanks to John Teasley for supplying this great photo!

Hank Henckler told me that he can't get over how short he is in this photo (boy in the red jacket) as today he is 6'3! 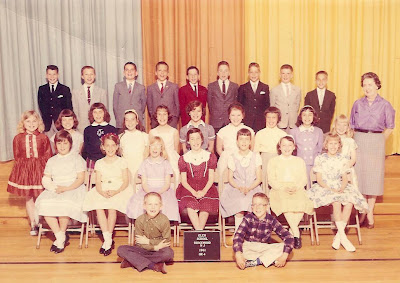 Front Row l to r: Larry McDaniel, We're given 3 names here its either Bobby Robertazzo, David Rehe or Bobby Brown - I could have sworn it was David

Posted by Rick Flannery at 8:05 AM