On November 21, 1963, our 3rd grade class - Miss Beattie - took a trip to Seton Hall to tape a radio program. Each of us that went along recited poems, sang songs and read stories which were all recorded in the studio there. The trip - we believe - was arranged by John Petrik's father but we're unsure about that. After we recorded our show and posed for pictures, we were given a tour of the facilities and learned the secrets of radio communication. We learned how programs were produced and broadcast. Following all of that we visited the physics department where we listened to explanations of the techinal aspects of radio communication. We had lunch in the University dining hall and concluded our trip with a visit to the Seton Hall museum where we viewed an exhibit on prehistoric man. 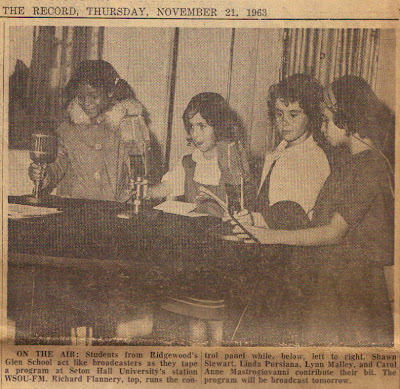 The Bergen Record came along to photograph some of us. Above l to r: Shawn Stewart, Linda Pursiano (Go Linda!), Lynn Malley and Carol Anne Mastrogiovanni.

The radio station was WSOU-FM. In 2007, I called the station and asked if there was a remote chance they would have a tape of our program but was unsuccessful! We were told the show would be broadcast at 2:05 eastern time on Friday November 22, 1963 - the very next day. I remember we were all pretty excited about the prospect of being on the radio but there weren't a lot of us that had FM radios at the time - so I remember my mom and dad scrambled to find people who had FM. My dad listened at work and my mom listened at a neighbor's. Our class all gathered at our desks and prepared to listen to our show on the PA system. 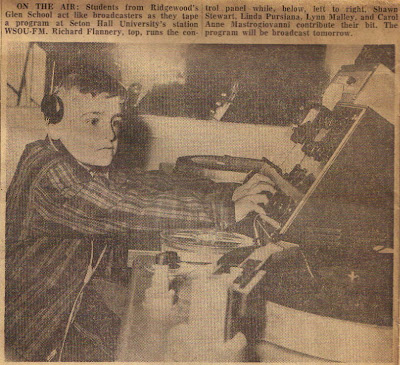 Above is yours truly at the controls - I was told to "look like you're producing the show!" Smile Rick!

As we sat in anticipation - giggling about who said what - our broadcast was suddenly silenced - John F. Kennedy was assassinated! It was incredible! While many us didn't grasp what was going on immediately - our teachers and principals protected us from it - we were abruptly sent home! I remember walking down the path I always took running into Larry Rogers - older than us - and he said he thought he had heard Jackie Kennedy was shot. Once home though, it was clear what had taken place - it was amazing. My mom was very upset. Beth Daly recalls her mom sitting in front of the black & white tv crying. 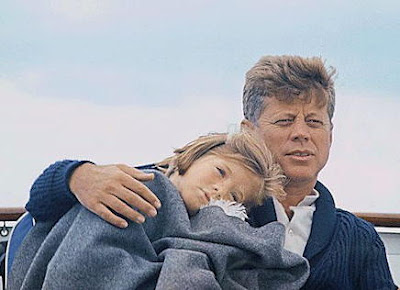 It was quite a weekend - 4 days of constant and very sad news. It would be the start to an incredible decade of turbulence that would see more assassinations - Robert F. Kennedy, Martin Luther King and the decade would be capped with the landing on the moon! The amount of things that ocurred and cultural changes that were taking place in such a short time is mind-boggling when one looks at the decade as a whole, but thanks to our great parents, teachers, friends and families, our childhoods still managed to survive and provide many of us with very happy memories.
Posted by Rick Flannery at 10:16 AM