Recently, with the help of Kurt Flechtner RHS 1977, we located our beloved gym teacher Charlie Bookstaver. I spoke to Charlie on Thursday January 15, 2009.

Charlie and his wife Eileen still reside in the home they built in North Jersey and have lived there for nearly 50 years! When the house was completed, moving day for the Bookstaver's was the day that John F. Kennedy was assassinated - November 22, 1963.

The vision for many of us is of him being in top pyhsical shape and twirling that whistle around his fingers - as he barked his orders! He says he always stayed very active. He also never seemed to make a mistake - when he demonstrated shooting a basket - it was always a swish. Kids, don't forget your sneakers!

Charlie grew up in Hastings-on-Hudson, NY. In 1944, he enlisted in the Navy and was assigned duty on the USS St Paul - a newly christened heavy cruiser. After practice runs to Trinidad and Guantanamo Bay, he entered the war in the Pacific Theater via the Panama Canal. At the time, the talk was of an invaision of the Japanese mainland, but while anchored far enough off the coast, it was reported that the atomic bombs had been dropped. The USS St Paul then participated in the Japanese surrender ceremonies.

Charlie left the Navy in June, 1946. Using the GI Bill, he enetered New York University where he studied education and became a certified teacher in 1952.

He taught for several years in New Hampshire and joined the Ridgewood Public School system in 1959 where he became a physical education teacher. In Ridgewood, Charlie divided his time between Glen, Somerville and Travell Annex schools. Before retiring he finished out his time at Ridge School.

During the 60's, Charlie was a lifeguard at Ridgewood's Graydon Pool. He left Graydon to head the recreation program in Allendale in the summer months. 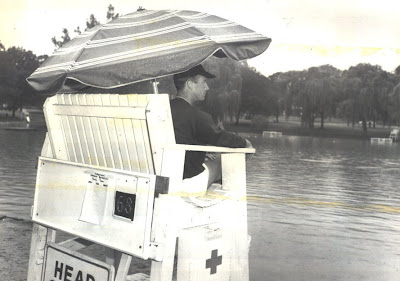 Above is a photo of Charlie Bookstaver as a Graydon Pool lifeguard in September, 1962.

When I spoke to Charlie, he remembered his time at Glen as very enoyable. He also recalled the tragedy of our principal Arthur Linden - Mr. Linden had lost his wife to illness and then suddenly passed away himself shortly after.

Charlie retired from the Ridgewood Public School system in 1989. He and his wife Eileen have 2 children: Mary and Sean and 6 grand children. 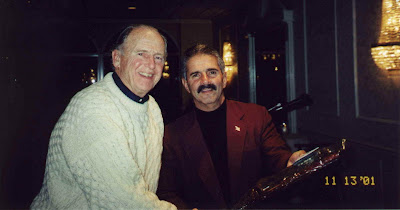 Charlie loved working with and teaching kids and became heavily involved in officiating basketball and soccer games. He was honored for his dedicated service at a Bergen County Soccer Officials banquet in 2001. He is the guy in the Irish knit sweater. 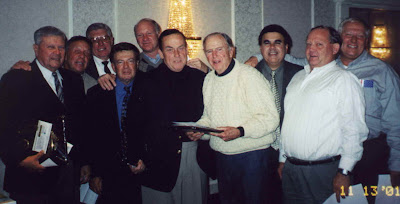 Posted by Rick Flannery at 4:38 PM