Its funny how these things work. You research one thing and you discover something else! Recently through Paul McCubbin of the Ridgewood Blog - I met Kurt Flechtner. I read about his great memories of life growing up in our unique little town. Among the things Kurt wrote about with great fondness was his dad Richard Flechtner. Mr. Flechtner as many in my Class of 1973 will remember was the Ridgewood High School Athletic Director and Department Head and a wonderful man. 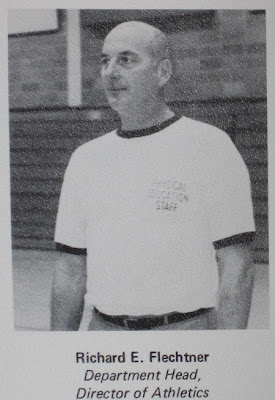 Not only was he involved in our RHS sports but heavily involved in the Ridgewood Baseball Association and he ran Graydon Pool as well! Richard Flechtner and Charlie Bookstaver were very good friends.

In my search for Charlie Bookstaver - Glen's beloved gym teacher - I found Kurt and he put me on the track that led me to Charlie and his wife. In researching photos for the Glen site, I came across a picture of a Glen School secretary from the 1970's - "Mrs. Flechtner" - lo and behold this was Kurt's mom! 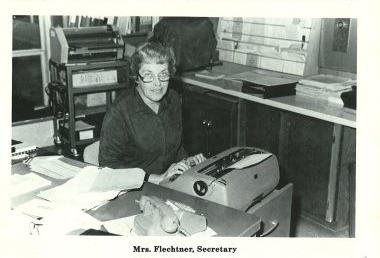 As Kurt and his brother Jim got older Barbara Flechtner decided it was time to get back in the school system in some way so she joined the staff at Glen School about 1974.

Because the school nurse by that time was only part-time (split between other schools) Mrs. Flechtner always had a stash of her sons toys such as Etch-A-Sketch for them to play with while they waited to get picked up or just needed some rest. She would lay them on the "Magic Couch" - the huge slippery green couches we all remember - get a little rest and half the time the child would return happily back to class!

Mrs. Flechtner would ultimately move over to RHS where she became her husband's secretary. Kurt recalls what a pleasure it was for them both to work together.

Barbara took the summers off while Richard ran Graydon Pool - they would always vacation at their cottage in Cape Hatteras in August.

In February 2006, Barbara Flechtner passed away. Mr. Flechtner passed away several years earlier. In her later years, Barbara became a renown quilter - in fact at her funeral, the church was decked out with all the quilts she had made - there were tons of them! Even the priest who presided asked how many of those present had received a quilt made by Barbara Flechtner - 75% of the people raised their hands!

Kurt Flechtner now lives in Norfolk VA. He recalls life in Ridgewood as very special and cherishes his memories as a Graydon Pool life guard.

I am grateful to Kurt for giving me the opportunity to talk to him about his mom.

Posted by Rick Flannery at 8:24 AM