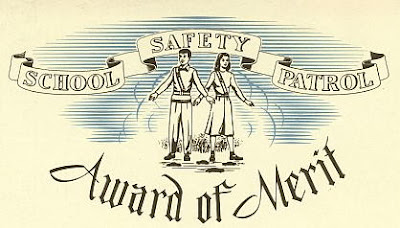 Who can forget how eager we were to become members of the "Safety Patrol" in 6th grade! I thought it was so cool to get my white belt and yellow crossing flag. There were a number of us that participated in the program. We probably alternated our assigned locations cause I think we only had 3 crossings. Bruce Meneghin and I had E Glen Ave & Auburn. Katie Knight & Beth Daly were also Safety Patrol members who took it very seriously! Who else? I know there were lots of us. 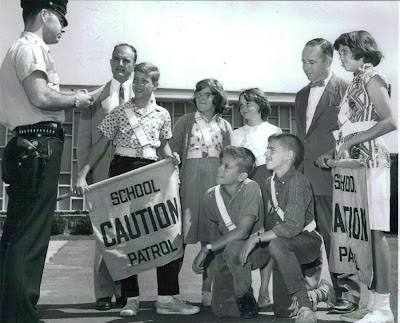 This photo appeared in The Ridgewood News in the 1960's. Here is the original caption: 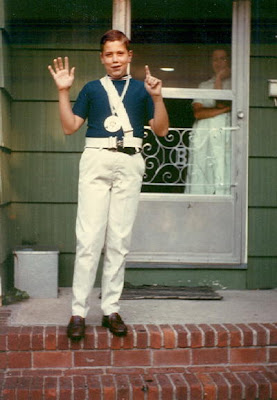 Above is Safety Patrol Captain John Brevoort (Glen Class of 1969). John had the luxury of riding around on his bike checking on his patrol "staff" to ensure they were doing their jobs and then at the end of the shift releasing them to class! This same year John organized his first boy/girl party in his basement! Thanks John for this great picture! 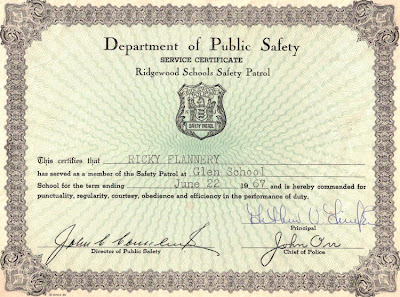 Above is my original Safety Patrol certificate signed by Mr Linden! Exciting stuff when you're a kid! Amzingly my mom saved it - my mom should have been an archivist!


Bruce Meneghin recalls that on his way "to duty" one day, his crossing flag got caught in the spokes of his bike and you guessed it - he went right over the handle-bars - his biggest concern afterwards - the hole in his brand new chinos!

For Cynthia Wagner she remembers the beat at the flagpole with Julie Zima and singing their hearts out "...Bill! I love you so, I always will!.....". Diana Wagner had my old beat - E Glen Avenue.

It gave us a little independence and of course responsibility - oh and you could be late for school too! 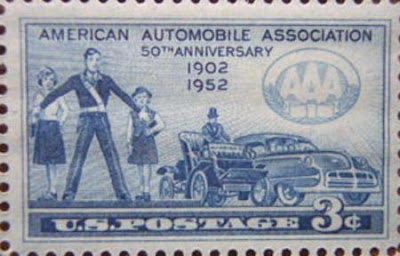 The School Safety Patrol program was organized by the Automobile Association of America in 1920. The program was funded by the AAA in local school districts. It was designed to help insure the safety of children walking to and from school each day. Each intersection was manned by a boy or girl from 6th grade. We wore a belt-like strap across our chest and waist and were given a crossing flag. If I remember right there were even ranks like Lieutenant & Captain! On the last day of school we were awarded pins and certificates for our "bravery"! 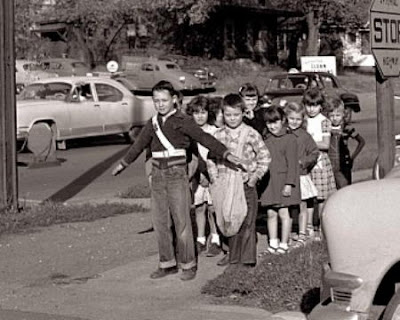