Despite construction of the school being behind in the summer of 1959, Glen School opened its doors to its first classes on September 9, 1959. The school was officially dedicated along with Ridge School on January 31, 1960.

With the baby boom still going strong, Ridgewood saw its biggest change in the public school system in years as Glen and Ridge Schools neared completion in late summer of 1959.

The elementary school children were being housed in a wing of George Washington (the Monroe-Hillside Building) and several rooms in the West Side Church Education building. Once the new schools were completed, George Washington became exclusively a junior high school - one of 2 in Ridgewood - now middle schools.

For the first time in Ridgewood's history, kids from the east side of Route 17 would attend a school in their own neighborhood off East Glen Avenue.

Both schools were state of the art buildings. Ridge School was several times larger than Glen and as one reporter was quoted, he thought Ridge "is easy to get lost in".

Essentially, Ridge School had its main portion fronting West Ridgewood Avenue but set back from the street. At the time, it contatined a "general all-purpose room" which doubled as a gym and auditorium, offices, nurse's room, and 2 kindergartens located at the east end. From the main part of the building, 3 wings jutted outward in different directions. The first wing housed 1st and 2nd grades, the second wing 3rd and 4th grades and the third wing 5th and 6th grades. 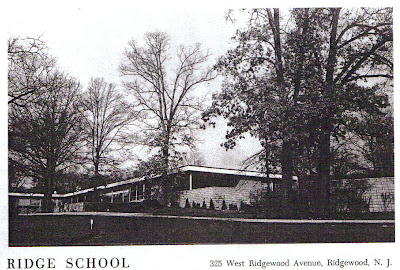 The classrooms in both the Glen and Ridge schools were very light and airy with floor to ceiling windows on the outside portion and wide glass partitions on the corridor side. Each room had a door to the playground and recess areas. The rooms were all grouped around exceptionally wide corridors which were expected to be utilized as additional space for small groups of students working on special projects or for several same-grade classes to join together for some special activity.

The modern school architecture of the day was prevalent with the use of light woods and brick inside and out.

Glen was built with rooms grouped around an open courtyard at the center that had a beautiful stone wall and even a reflecting pool. The reflecting pool (later used as a garden) and stone wall was where the dark slate is in the picture below. Where the stone wall extended out, additonal grass was planted. 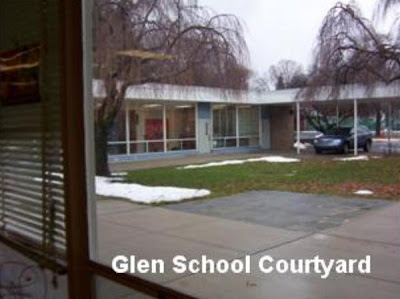 (Picture from the collection of Doug Terhune - 2007)

The all-purpose room at Glen was smaller than at Ridge but also doubled as a gym and auditorium with a stage for concerts and shows. It had two basketball hoops and ropes for climbing. In the room to the right of the stage, were monkey bars and storage for the mats, balls, etc. 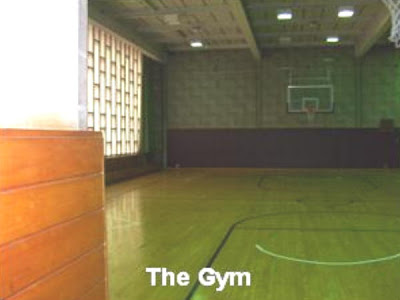 (The gym pictures are from the collection Doug Terhune - 2007) 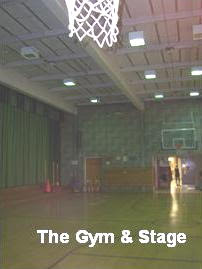 In addition, there was a beautiful well-stocked library, kindergarten, offices, storage, music room, faculty room with kitchenette and classrooms. 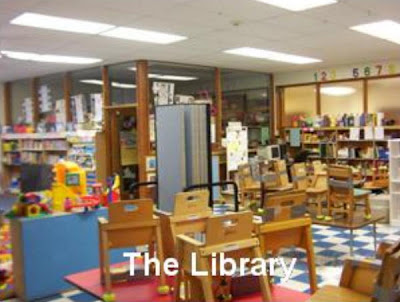 The playgrounds were divided into 3 sections. The sand box area was exclusively for kindergarten. 1st-3rd grade had the main playground: swings, slide, monkey bars, see-saw and huge checkerboard. The 4th-6th grade had use of the blacktop for kick ball and the fields for other activities. The baseball fields still remained unchanged with the two ball fields sitting where they were 40 odd years ago!

A visit to Glen today is seemingly a visit to Glen 30-40 years ago - not much has changed which makes for a very sentimental journey!